A warm welcome back from RK’s Menswear 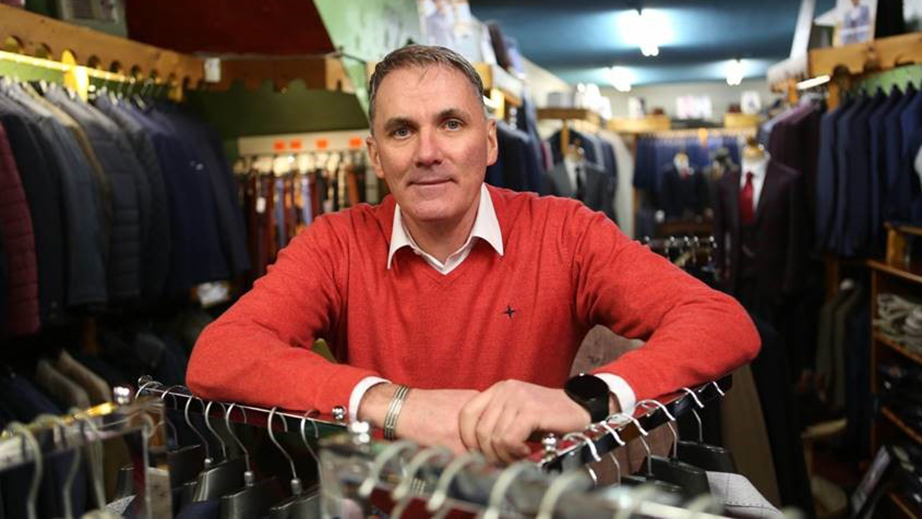 RK’s Menswear has been a presence in Strabane for as long as many can remember and it’s a perfect blend of old-school customer service with up-to-the-minute style.

Generations of men from Strabane and the wider North West have been getting suited and booted there for all the big occasions in their lives and owner Danny Gallagher is delighted to be welcoming them all back, especially as wedding season is hopefully getting into full flow again.

Well known Sion Mills man Danny has been in charge since 2017 but he worked there for Raymond Kirk for many years during the 1980s, so he’s seen fashions come and go but very much feels that there’s always a place for independent retail outlets like his own in the modern world.

Danny said: “This shop used to be part of O’Dohertys. Raymond Kirk came in to work for them as a schoolboy and took over what was the shoe department in 1976. I worked for him from 1982 until August 1991 when I left and went in to financial services. I called in to wish Raymond well in October 2017 when he was closing up to retire and I ended up taking over!”

He continued: “When I came in, I focused on weddings and suits and 2019 was a good year for wedding groups. The men generally buy their suits now, they wouldn’t hire them out like they used to. I was expecting 2020 to be equally as good if not better but we all know what happened.

“Thankfully I have a number of weddings booked for this year and hopefully more will keep coming as things open up further, both here and in Donegal. I hope we’re coming to an end of lockdowns and restrictions and returning to a bit of normality. As well as the weddings, we’ve missed out on formals, and there wasn’t as much demand for outfits for Communions and Confirmations because the ones that went ahead had much smaller numbers.”

Every taste, shape and budget can be catered for at RK’s Menswear as Danny stocks extra slim to large fit from top brands including Remus Uomo, Daniel Graham, Douglas, Skopes and Fratelli Uniti, Scott & Wade amongst others.

Footwear is also available and anyone who wishes to purchase the complete wedding package will receive a 25% discount.

It really is a one-stop shop, as Danny also stocks every imaginable accessory, including tie pins, pocket watches, wallets, braces and more, so ideal for any man who doesn’t like the idea of trailing around a range of stores to get everything he needs!

Danny couldn’t be happier to be back on the shop floor. He said: “I was off for 125 days – from Christmas Eve until April 30th – and the sign blew down just before we reopened which caused a bit of confusion but we are very much open for business again now.

“You don’t always need an appointment, but they are available for evenings and weekends if you want to set aside some time to take a good look, we are always very accommodating.”

Danny added: “It’s reassuring to know that local businesses have a support network provided by Strabane BID who are working for the betterment of the town and its businesses.”

This message is only visible to admins.

Error: Error validating access token: The session has been invalidated because the user changed their password or Facebook has changed the session for security reasons.
Type: OAuthException
Subcode: 460
Solution: See here for how to solve this error

Any cookies that may not be particularly necessary for the website to function and is used specifically to collect user personal data via analytics, ads, other embedded contents are termed as non-necessary cookies. It is mandatory to procure user consent prior to running these cookies on your website.